So, I mentioned that Dave and I have found a pizza place in Chicago.  This is actually kind of a feat, since we haven’t been here very long.  And when you’re talking about Chicago pizza, everyone and their mom has an opinion.

Lou Malnati’s is a Chicago institution….Accordng to Wikipedia (so take this with a grain of salt),  Lou and his wife co-managed Pizzeria Uno in the 1950s, after Lou and his Dad Rudy began making deep dish pizza inn the 1940s.  The first resturant opened in Lincolnwood in 1971 (Lincolnwood is the first ‘town’ heading north out of Chicago towards Evanston.  We happen to go to the Lincolnwood Resturant, but I don’t know if it is the original.
It’s just plain delicious… the crust is sort of biscuity… and the sauce is zesty.  Everytime we get Lou’s, Dave and I engage in at least a five minute conversation about what makes it so awesome… of course, we get the butter crust, so maybe that is the key (although Dave contends it is the sauce).  Regardless, it’s a friday night tradition I really like.  So much so, I will cut back on snacking throughout the day, make sure I get my bike rides, and my CrossFit workout just to make sure I can really enjoy it (without the guilt of eating pizza in the middle of Mission: lose last of Nico baby weight before trying for numero dos baby).
Saturday morning, Nico had the first lesson of this new round of swim lessons.  We had a pretty funny miscommunication about them.  I didn’t go to his last class and figured that if he was ready to move up to the next class that his teacher would have said something to that effect.  So I sent Dave to the Y with the expressed mission to sign him up for Pike (AGAIN).  Dave, because he is a good husband, did this, even though he had gotten a note from his teacher saying that Nico was ready to move up.  Said note was posted on the fridge… I just didnt notice it.  He contends that I must have had a good reason for keeping Nico in this class, evven though his teacher says he is clearly ready to move up.  Which is all kind of hilarious.
Saturday night Nico and I went to Target to get a few things.  He’s fairly aware that he might get a baby sister or a baby brother someday, and has started keeping track of all the toys he wants to get her.  He says her, because he thinks he is getting a baby sister and that he can call it.  Which is precious.  I have also figured out the trick with the toys, which is that we take a look at the toy section to see what kinds of toys we want to add to his Christmas list (it was his birthday list, but now the big holiday is Christmas).  This helps me get him out of the store without a MEGAMELTDOWN.
Sunday, we took Nico on a bike ride up to Indian Boundary park, which is abot 2.5 miles away from the house.  The park has this massive wooden castle structure play thing that Nico loves. 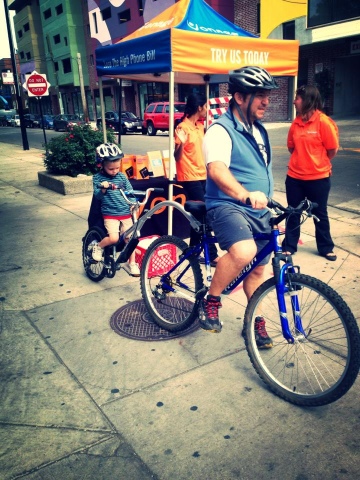 Afterwards, we stopped at Emerald Isle (a pub) on the way home for lunch.  He has entered the age of wanting to play arcade games.  He is also starting to figure out how to work the system.  For example, there was a dart game that he wanted to try.  Not knowing how to play it (and moreover, not having any darts), I explained that I wasn’t sure how to play and that was the reason I didnt want him to play it.  He explained that he wanted to learn so that when he was a grown-up, he would know how to play. Who can resist such an argument?
After nap, Nico and I headed out to get groceries.  He’s getting so big and grown-up, I can barely believe it sometimes.  In fact, this weekend, he explained to Dave that he didnt need to go to school anymore, since he knew everything already.