The only bad thing about summer is that Chicago loses its damn mind with the nice weather, so everyone decides to HAVE THEIR BIRTHDAY PARTIES! HOLD THEIR FESTIVALS!! EVERYONE BE OUTSIDE!!!  And we have just been having TOO much fun.

In the last couple of weeks, we went out to the Botanic Garden to see some kid’s music band. We went with R and J and their daughter Lil M.  Nico quickly found an older boy to play with and spent his time running amok with them.  Then the boy, unbeknownst to Nico invited Nico for icecream with his family, which he accepted.  In other news, we have started talking about stranger danger.
After the garden, we headed over to Northwestern and checked out their showing of Frozen.  Nico has probably seen the movie, conservatively speaking, 30 times.  And was as engrossed as ever while watching the movie with a bunch of weirdo undergrads at Northwestern.  Which was hilarious.  During the songs, it basically became a sing a long.
Last weekend, Nico was invited to a friend’s birthday party.  The party was tacked onto a neighborhood block party, which was pretty cool.  So, there was the birthday part… and then there was the running amok with a bunch of older kids from a neighborhood that he doesn’t even live in.  Which was hilarious. 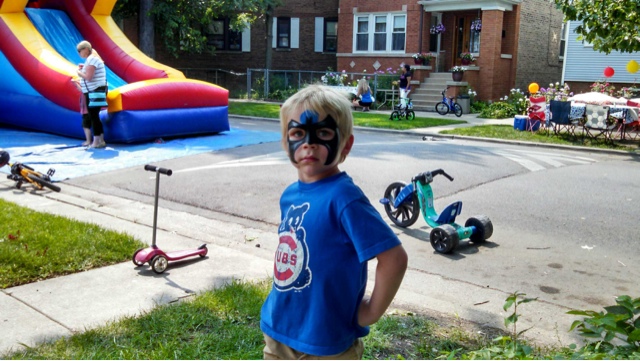 He had an important lesson at the party.  There was a face painter and he got his face done up like batman.  But then he got upset about something and had a fit.  This caused the paint to start coming off.  But, then he became aware that the face painter had left, which caused another fit.  And this fit caused him to miss the pinata.  I hoped he learned the lesson that causing a fuss over little things cause you to miss out on other fun things.
I was in Ann Arbor this week doing a stats training.  I missed my boys. I ended up at Target buying a gift for another birthday party and got Nico a ninja turtle mask. 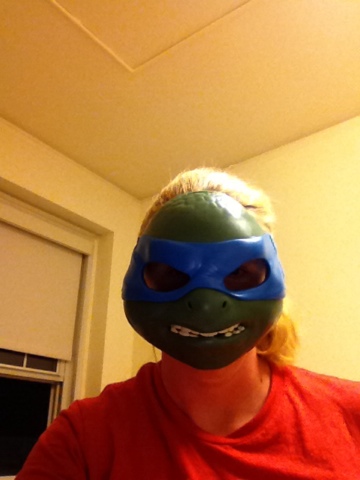 He seems to be pretty excited about it.

Ninety Percent Mental
Hunger
Unbroken
The Wife
China Rich Girlfriend
I Know How She Does It
The Chemist
The Bullet Journal Method
The Summer Before the War
Furiously Happy
Yes, Please
We Should All Be Feminists
Educated
In Her Shoes
Mastering Suspense, Stucture, and Plot
One Day in December
Becoming
Prick
My Brilliant Friend
The Little Book of Hygge
A Storm of Swords
The Prince of Tides
Forest Bathing
The Finkler Question
An American Summer: Love and Death in Chicago
Maid: Hard Work, Low Pay, and Mother’s Will to Survive
White Rage: The Unspoken Truth of our Racial Divide
The Truths We Hold
This Fight Is Our Fight: The Battle to Save America’s Middle Class
The Island of Sea Women
The Theft of Decade: How the Baby Boomers Stole the Millennials’ Economic Future
The Island of Sea Women
The Hacking of the American Mind
Panchinko
The Hunger Games
Catching Fire
Mocking Jay
Outlander
The Valedictorian of Being Dead
You’ll Grow Out of It
Finding Fraser
Fed Up
Writing Science in Plain English
K: A History of Baseball in Ten Pitches
What Happened
The Good Life
Blowout
The Water Dancer
A Walk in the Woods
Barracoon: The Story of the Last Black Cargo
Emma
Why Not Me?
Mercy Road
The Dressmaker